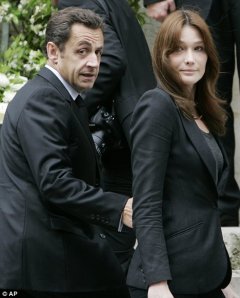 ”Carla, who has said that all the men she has loved had a strong feminine side, didn’t hesitate to say that Sarkozy was no exception. ‘My husband, who is so, so man in a certain sense, has a very feminine sensitivity. A man can have feminine values, he can be super-sensitive, without being feminine. Nicolas is very sentimental. That’s rare for a man in his position. Feelings are the most important thing in his life’.”