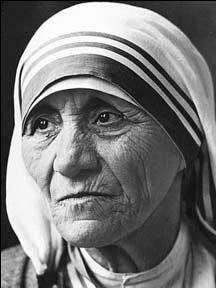 MT was not a friend of the poor. She was a friend of poverty. She said that suffering was a gift from God. She spent her life opposing the only known cure for poverty, which is the empowerment of women and the emancipation of them from a livestock version of compulsory reproduction. And she was a friend to the worst of the rich, taking misappropriated money from the atrocious Duvalier family in Haiti (whose rule she praised in return) and from Charles Keating of the Lincoln Savings and Loan. Where did that money, and all the other donations, go? The primitive hospice in Calcutta was as run down when she died as it always had been—she preferred California clinics when she got sick herself—and her order always refused to publish any audit.